At the end of January a small contingent of AXIS staffers and I attended the 2017 installment of the Americas Lodging Investment Summit.  In addition to being recognized as one of the foremost gatherings of names in hotel and hospitality investment, the summit enjoys the enviable timing as one of the earliest perennial events on the industry’s calendar – a position that naturally makes the summit one of the best bellwethers of the health of the industry for the coming year.  As regular readers of our On the AXIS Blog will recall, many in the industry spent much of 2016 contemplating the timing of the end of the current cycle – a topic that more-or-less dominated the conversation at last year’s ALIS event.  Back then, industry prognosticators had already started to sense the impending wind-down of the current cycle.  Twelve months later, and with no clear or prevailing opinion how the end of this cycle might play out (but no shortage of experts continuing to tell us the end is near), stakeholders are understandably growing tired of hearing of impending doom.  With 2016 ending without a satisfying answer to the question “Where’s the peak?”, the prevailing attitude among attendees of the 2017 summit seemed best captured as, “Who cares.  Let’s get on with business.”

Uncertainty is the new normal

For much of last year a handful of issues carried the blame when it came to explaining the “wait and see” attitude that hampered industry confidence in 2016: contracting access to credit, the growing risk of oversupply in some markets, and the changing profile of a profitable project all combined to handcuff industry enthusiasm.  For attendees of ALIS 2017 hoping this year’s event would put an end to the persistent uncertainty, the summit’s official theme said it all: “Please stand by.”  With 2016’s conditions unchanged coming into the new year, summit attendees seemed ready to accept that uncertainty may be the new normal in 2017.  Here’s a glimpse why:

Last year Brexit and the threat of a Euro currency break-up put jitters in exchanges around the world.  Not unexpectedly, those jitters had the effect of making banks and private investors skittish as global geopolitics influenced their lending appetite on a month-to-month basis.  Lenders that did have the funds and the appetite to invest in hospitality real estate retreated to REITs with their more-or-less predictable performance, leaving those seeking financing for hospitality projects with a shrinking pool of lenders to back their projects.

In 2017, it looks as though geopolitics will continue to dampen lender appetite with “Trump Uncertainty” replacing Brexit as the source of concern.  For markets at large, and in spite of the rally US exchanges enjoyed following Trump’s inauguration, it remains to be seen if the Trump presidency will be good or bad for business and credit markets.  For the hospitality industry specifically, the Trump presidency is even more curious given Trump’s notable hotel holdings and the unique dependence the hospitality industry has on unionized and first-generation American labor – two things Trump has been less than eager to appreciate.

In a phrase, don’t expect access to credit to improve any time soon as lenders continue to wait and see how the Trump presidency will play out.  Also, anticipate REITs to increase their investment activity and compete more vigorously for projects as their equity continues to grow and they look to leverage their capital.

According to STR’s Senior VP Jan Freitag’s ALIS day two keynote address, 2017 will be the first year in this current cycle (and nearly a decade) that supply will outstrip demand.  In most cycles, such a prediction wouldn’t be cause for alarm, but in this cycle, with development pipelines flush with projects adding rooms to markets already signalling peak inventory, Freitag’s comments raise a red flag.  Adding credence to STR’s numbers was CBRE’s Mark Woodworth, noting that the benchmark and longstanding average of 2% inventory growth seen in 21 key markets ballooned to 46 markets last year, the suggestion being more-and-more markets are seeing inventory growth above what’s traditionally been considered sustainable.

On their own, slightly concerning supply numbers are one thing, but combined with declining consumer-side demand the issue gets a little more serious; once again citing Freitag’s day two keynote, consumer demand in 2017 is only expected to reach 1.7% YOY – well under GDP-levels of growth.  If consumer demand continues to soften with fewer guests filling the surplus of rooms in the pipeline, hotel operating profitability is likely to suffer.

The profile of the profitable hotel transaction is sure to change

2016 saw what might be the last “mega-transaction” the industry will see for a number of years: Marriott’s acquisition of Starwood Hotels.  One of the largest hospitality transactions ever – one that certainly created the largest hotel company in the world – consequences of the merger understandably dominated conversations in M&A sessions at ALIS 2017.  While attendees debated the merger’s influence on the mid and upscale hotel chain markets, what was well understood was how market dynamics that made the merger feasible in the first place had changed.  Although on a much smaller scale, for developers of large individual projects, many of the same changes are poised to affect the economics of their projects too.  Most significantly, and largely on account of real estate costs that continue to balloon in defiance of logic in many key metropolitan markets, project costs continue to erode profitability.  Given the industry’s challenges accessing credit, and with the question of oversupply unanswered in many markets, large projects in metropolitan markets are likely to give way to smaller, shorter, and less expensive projects in ancillary markets.

Operating in the uncertainty

With such similarity in conditions between 2016 and 2017, it’s not surprising the prescribed approach in 2016 continues to make sense in 2017.  In my blog post following last year’s ALIS event, “An Architect’s Perspective – 3 Hospitality Development Opportunities Highlighted at ALIS 2016”, minor markets, smaller and more nimble projects, and renovation projects that require less credit funding revealed themselves as key areas of opportunity last year.  Moving into 2017, it looks as though the same advice makes sense. 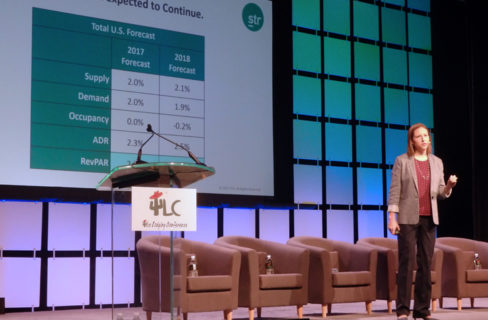 Image: Ali Hoyt of STR addresses attendees during the Industry Overview session Day One of The Lodging Conference 2017. Photo... 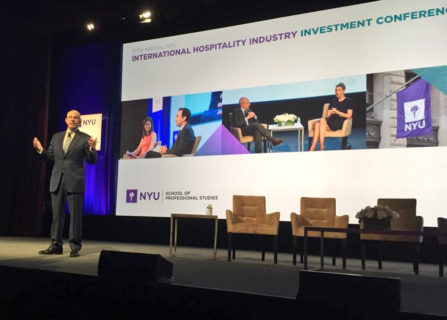 “DIFFERENTIATION, CONSOLIDATION, AND PREPARING FOR THE END OF THE CYCLE” – THREE THEMES TO EXPECT AT NYU’S 2016 INTERNATIONAL HOSPITALITY INDUSTRY INVESTMENT CONFERENCE

Image: Opening of the 2016 NYU International Hospitality Industry Investment Conference. Photo credit to hospitalitynet.org. This week, I once again...